Prior to this past Wednesday night’s episode of AEW Dynamite going on the air, former WCW Manager Missy Hyatt and Austin Idol were honored in a dark segment that was taped and will air during next week’s episode of AEW Dark.

During the segment, an AEW cameraman focused in on a fan sitting at ringside and wearing a “Vince Still Sucks” t-shirt. On Dynamite this past Wednesday night, the fans also pointed out the “Vince Still Sucks” t-shirt, but the cameras did not stop and focus on the message like they did during the dark segment where former WCW Manager Missy Hyatt and Austin Idol were honored.

The fan wearing the “Vince Still Sucks” t-shirt was seated at ringside but the focus comes in only at the 25-second mark in the video below. It looks like the t-shirt is for sale at $25 and is available via a teepublic.com and a user named RussJericho23. The t-shirt has a Hulkamania theme.

You can check out the video below, along with a screenshot of the t-shirt that was briefly focused on:

Prior to the start of #AEWDynamite LIVE from Huntsville, wrestling legends Missy Hyatt and Austin Idol made an appearance. pic.twitter.com/wlxkyaZ4qT 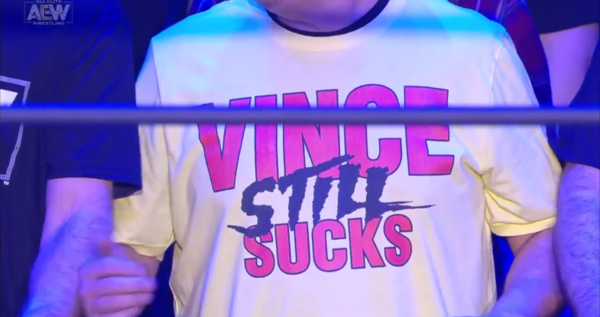 Be sure to join our WWE / AEW Discord server and connect with other pro wrestling fans.
Related Topics

Logan Paul Suffers Injury During His Match With Roman Reigns

Candice LeRae Talks Motherhood, Stepping Away From The Sport She Loves, And How Becky Lynch Inspired Her To Return

John Cena To Compete At Next Year’s WWE WrestleMania 39

WWE Plans To Have “Craziness” In WarGames Matches At Survivor Series

Why Did Cody Rhodes Leave AEW?

First Guest/Training Partner On ‘Celtic Warrior Workouts’ Has Been Announced